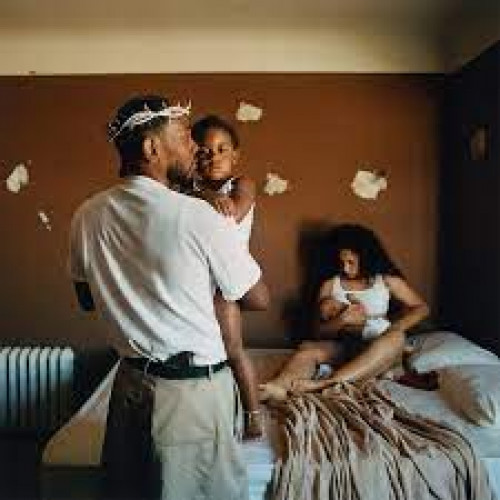 [Verse 1]
My auntie is a man now
I think I'm old enough to understand now
Drinking Paul Masson with her hat turned backwards
Motorola pager, Off-White Guess jacket
Blue Air Max's, gold chains and curl kits
'93 Nissan wax job, the earliest
Big social, big personality, vocal
Played underground verbatim and stayed local
My auntie is a man now
I watch him and his girl hold their hands down
Tip of the avenues under street lights made his
Thinking, "I want me a bad bitch when I get big"
They walk the corner like California king
Cold hand all up her skirt, cars whistling down the road
See, my auntie is a man now, slight bravado
Scratching the likes from lotto
Hoping that she pull up tomorrow
So I can hang out in the front seat
Six by nines keeping the music up under me
My auntie is a man now
Asked my momma why my uncles don't like him that much
And at the parties why they always wanna fight him that much
She said "Ain't no telling
Niggas always been jealous because he had more women
More money and more attention made more envy
Calling him anything but broke was less offending"

[Verse 2]
My auntie is a man now
I think I'm old enough to understand now
Drinking Paul Masson with her hat turned backwards
Back when it was comedic relief to say "Faggot"
Faggot, faggot faggot, we ain't know no better
Elementary kids with no filter however
My auntie became a man and I took pride in it
She wasn't gay, she ate pussy, and that was the difference
That's what I told my friends in second grade
She picking me up from school, they stare at her in the face
They couldn't comprehend what I grew accustomed
We pull off bumpin' Quik like it was nothing
My auntie is a man now, what a relationship
I grew up fast, I needed no one to babysit
He gave me some cash then gave me some gang
Cherry freshener on the dash, I never complained
She even cut my hair at the pad, was loving my fade
The first person I seen write a rap
That's when my life had changed
House full of demo, smoke stuck on the window
Cameras on the microphone, all women and men though
My auntie was a man now, we cool with it
The history had trickled down and made us ign'ant
My favorite cousin said he's returning the favor
And following my auntie with the same behavior

[Verse 3]
Demetrius is Mary-Ann now
He's more confident to live his plan now
But the family in disbelief this time
Convincing themselves "He ain't living discreet, he's fine"
They said they never seen it in him, but I seen it
The Barbie dolls played off the reflection of Venus
He built a wall so tall you couldn't climb over
He didn't laugh as hard when the kids start joking
"Faggot, faggot, faggot" We ain't know no better
Middle school kids with no filter, however
I had to be very mindful of my good cousin
I knew exactly who he was but I still loved him

[Verse 4]
Demetrius is Mary-Ann now
I mean he's really Mary-Ann, even took things further
Changed his gender before Bruce Jenner was certain
Living his truth even if it meant see a surgeon
We didn't talk for a while, he seemed more distant
Wasn't comfortable around me, everything was offensive
But I recall we both had a sick sense of humor
Made raw, but time changes all

[Verse 5]
Demetrius is Mary-Ann now
Remember church, Easter Sunday?
I sat in the pew, you had stronger faith
More spiritual when these dudes were living life straight
Which I found ironic 'cause the pastor didn't see him the same
He said my cousin was going through some things
He promised the world we living in was an act on abomination
And Demetrius was to blame
I knew you was conflicted by the feelings a preacher made
Wondering if God still call you a decent man
Still you found the courage to be subservient just to anoint
Until he singled you out to prove his point, saying

[Verse 6]
Demetrius is Mary-Ann now
Church, his auntie is a man now, it hurt
He the most 'cause his belief was close to his words
Forcing me to stand now
I said "Mr. Preacher man, should we love thy neighbor?
The laws of the land or the heart, what's greater?
I recognize the study she was taught since birth
But that don't justify the feelings that my cousin preserved"
The building was thinking out loud, bad angel
That's when you looked at me and smiled, said "Thank you"
The day I chose humanity over religion
The family got closer, it was all forgiven
I said them F-bombs, I ain't know any better
Mistakenly I didn't think you'd know any different
See, I was taught words was nothing more than a sound
If everything was pronounced without any intentions
The very second you challenge the shit I was kicking
Reminded me about a show I did out the city
That time I brung a fan on stage to rap
But disapproved the word that she couldn't say with me
You said "Kendrick, ain't no room for contradiction
To truly understand love, switch position
'Faggot, faggot, faggot,' we can say it together
But only if you let a white girl say 'Nigga'"

Out Of Pocket
Kendrick Lamar